Here some screenshots showing the problem in Business Development Studio (BIDS) 2008 – where we design the Reporting Services reports, notice that the BIDS 2005 “Data” tab is not more a tab but a dialog window: 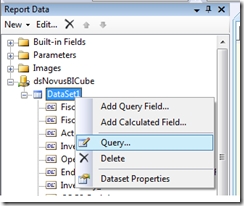 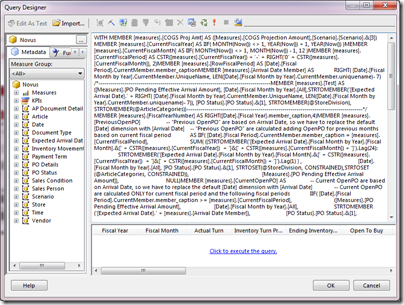 Below how the same query looks in the BIDS 2005 MDX Query Editor (showing the “Data” tab in the same window when we design the report): 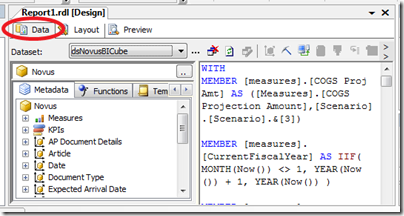 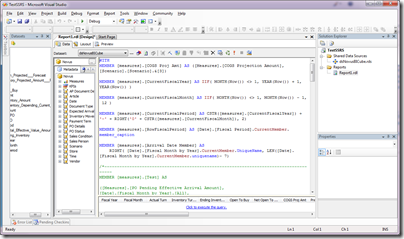 From some time ago, I was looking for some explanation about why syntax highlighting doesn’t work in the current version of BIDS (and with the hope of turn that feature on as in BIDS 2005) but without any success.
Finally, some days ago I decided to contact Microsoft directly about this issue. First at all, I have to say that I was very pleased about the prompt and fast response from Carolyn Chau from the Reporting Services Team, it was a great example of customer service!

“…I’m afraid we lost this feature between 2005 and 2008 due to a strange quirk in the combination of VS and the MDX query designer.  When the query designer is hosted in a dialog page as we have in 2008, syntax highlighting does not work.  We continue to try and find work arounds to this issue…“

Finally, you know what is going on with syntax highlighting in BIDS 2008. Carolyn gave me the explanation response about this “bug” directly related to the integration of custom dialog windows and the Visual Studio IDE.

Extra-officially, this bug could be fixed in the next release of SQL (SQL 2008 R2), so we need to wait until the CTP to see it. Meanwhile, we have to patiently continue creating our MDX queries in SQL Server Management Studio or in BIDS 2005 (if you have it installed side by side with your 2008 version) to then copy and paste to BIDS 2008.